To add a new song to your Artist Account, go to your Asset Manager and click Songs on the left hand toolbar. This is your Song Recording Title or SRT page.

The red asterisk next to the field means the field is required. You will see a green check mark in the menu on the left side of the screen once each of the required fields is completed. If the Complete button at the top right does not turn blue, check this list for missing check marks!

Click Add Song Recording Title in blue as shown below.

As you already know, we require that the Songwriters and their shares be defined on all songs. Artists must connect their Song Recording Titles (SRT's) back to the Songwriter's Song Composition Titles (SCT's). You can not fill out this form unless you make the connection!
Note: You can avoid this connection in some situations; 1. If this is a cover song and you have a license. 2. You are a music label and you make the payments to the copyright owners. You will need to contact RR and request that we allow Cover Songs for your artist account.

If you are also the Songwriter and you already shared assets between your Artist and Songwriter Accounts, click Shared from my songwriter account and you'll see your Songwriter Compositions (SCT's) show up in the list. If you see the song you can select it or type the song name in the provided field to search for it. 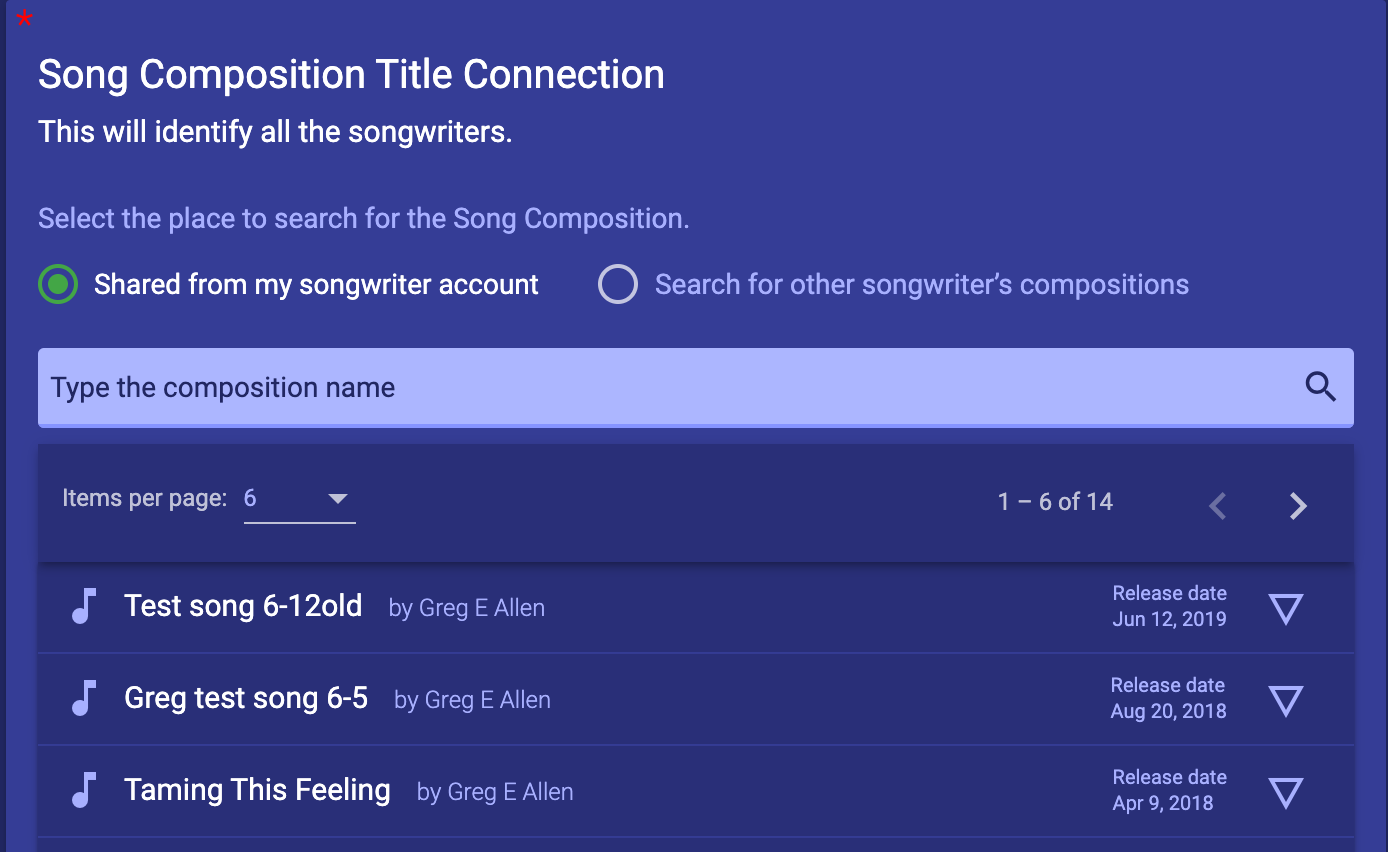 If you are not the Songwriter then click Search for other songwriter's compositions and type the song name. If the song has not yet been created by the Songwriter, it will not show up in the system.

You'll need to ask the Songwriter to create that song on their Songwriter Account so you can connect to it.

When you make the above connection, the Song Recording Name will automatically be filled in as defined by the songwriter. If the song recording name does not automatically show up, there's an issue with the information in that Song Composition.

You can be the owner of a recording and not be songwriter. This is why Artists and Songwriters have separate accounts. Artists get paid for selling recordings of songs while Songwriters get royalties for writing those songs.

An ISRC is an International Standard Recording Code which is a unique code given to any recording that is made. If you want to be tracked with Billboard, you need to have an ISRC code on your song.

Having an ISRC is an optional step in releasing a song through Rhythmic Rebellion: ISRC enables recordings to be uniquely and permanently identified. ISRC helps to avoid ambiguity with different songs and simplifies the management of rights when recordings are used across different formats, distribution channels, or products.

The ISRC is where the song needs to be identified so that copyright holders of the song are paid for the recording.

The ISRC for a recording remains a fixed point of reference when the recording is used across different services, borders, or under different licensing deals. Keep in mind, you do not need an ISRC to release a song, but you will need that song to have been created by a Rhythmic Rebellion account.

If you want to know more about ISRC click this link. From there, you can register to have your own ISRC codes generated for your own music or music that you help release.

Below is a brief graphic showing what an ISRC looks like and what the characters mean. In short, this is just a specific bar code for each piece of music. Because music can be seen as a product, these ISRC codes are used so that others are not stealing your 'product'. 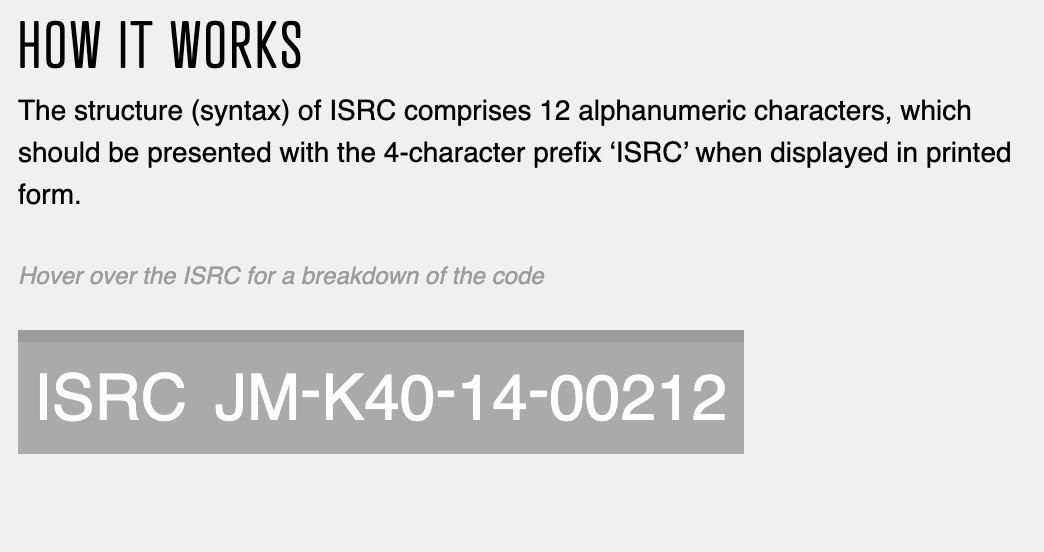 Next you will need to include the date that the recording was made. This is another data point that will be searchable by fans, labels, and publishers.

If you do not know the exact date that the recording was made, just estimate as close as possible. No need to be completely exact for songs you wrote many years ago.

1. Next attach your WAV file. A WAV file is required to release the song on your Artist Account. We will automatically convert it to an Mp3 file that has the best capabilities for streaming. We prefer to stream Mp3s to your fans because they stream faster and cause less buffering if there is a poor connection.

2. The encoding starts as soon as you select the WAV file. You will see the notification about generating a Mp3 file. This can take a few seconds to complete.

3. It will have the same name as the original WAV file and be available in the left sidebar menu under "Audio." This transcoded Mp3 file has "RR" label.

4. When the transcoding is finished, you'll be notified that from now on, your song has two versions: an Mp3 with a bitrate of 192 kbps for streaming and the original WAV file. If a fan buys your song, they'll have the option to download the Mp3, original WAV, or FLAC file! WAV and FLAC are higher quality versions for downloading.

5. Don't worry if your SRT has an Mp3 file attached. It is still valid and supported. You can click the "Unattach" button and select the WAV file. That file will be automatically converted and is perfect for streaming!

6. The "Attach FLAC audio file" section is optional. You can provide FLAC files to allow your fans to download higher quality files when they buy a song, but it is not required.

This image will appear on the music player promo tab when the song is played. The image you select will appear every time someone streams the song.

Radio Ready - If you think the recording quality of your song is good enough to be played on the radio then select YES. Our staff will review your song and if we agree, your song will be approved to appear on our curated playlist.

Free Download to Followers - If you want to offer a song as a free download to fans that follow you, select YES. Then set the price to buy that song.

You can create an album with unreleased songs on it, place that album on your website, and those songs will NOT be available for play until the release date comes. So, you can set up a release ahead of time and when the date and time arrive, our system will make your album and songs available to fans based on the date you set. Fans are not allowed to download or hear the song until it is released. Once you click the Release / Make Visible button on the SRT card, fans may see the title of this song in your albums or playlists but play will not be available. Fans can pre-order the album in the Merch Store but are not allowed to download or hear the album until the album release date. Even with pre-orders, a song can be heard early if you give it an earlier release date than the album release date. 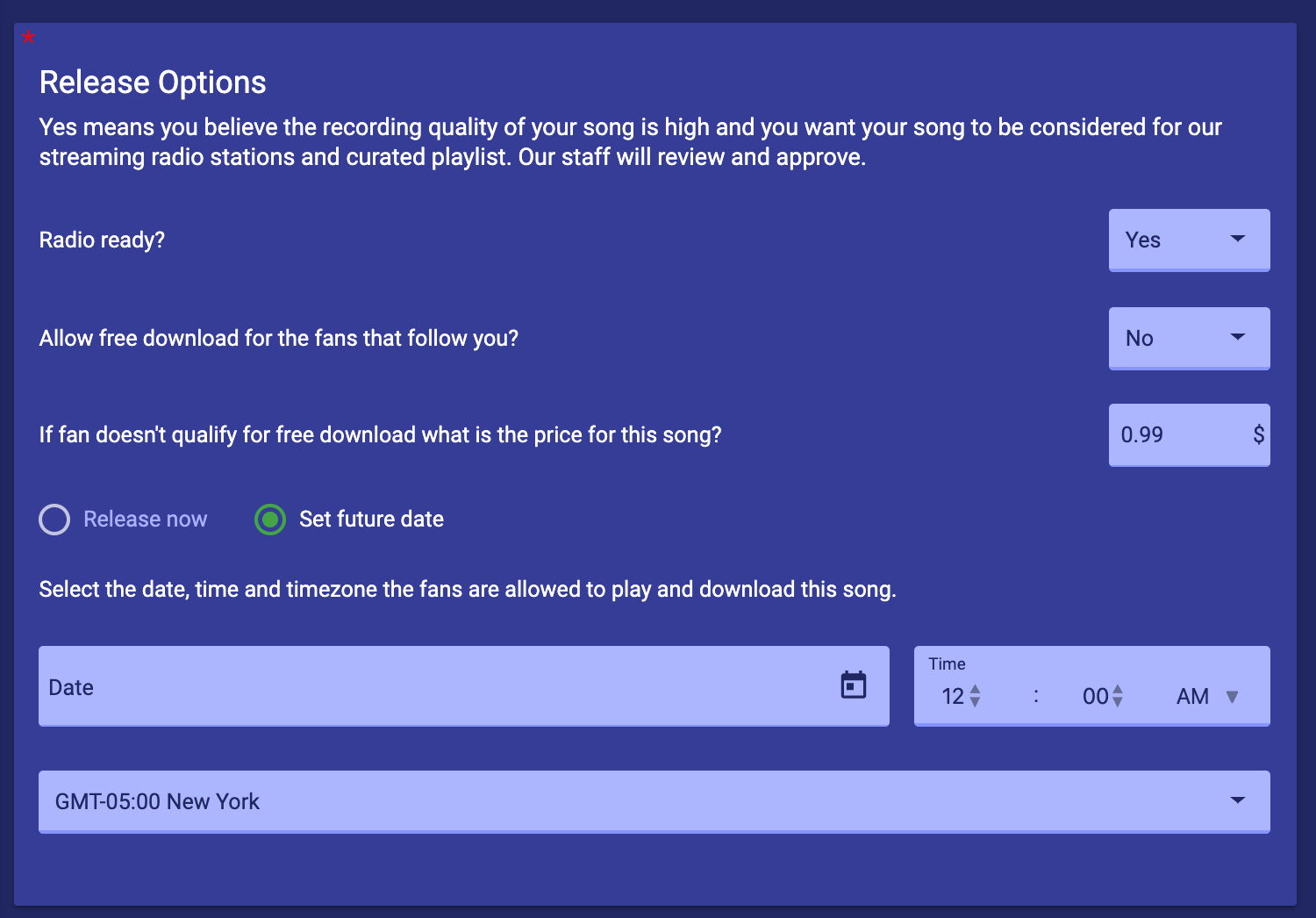 This selection determines if your song is available for on-demand streaming. If you are trying to build a fanbase then select YES for this option. If you say NO, fans can only hear a short part of the song. You want fans to hear your music and fall in love with you as an artists. If you are coming out with new music and would like to sell albums and content before you make it available for on-demand streaming, then select NO. Once you feel you have sold all the albums you can sell, come back and change the Streaming Options to YES.

Selling New Songs or Albums: If you want to sell this song select NO and you will be given the chance to select your favorite preview option. Your options are 45 seconds, 90 seconds, or Full Song Previews from 1 to 10.

That means a Rhythmic Rebellion registered fan can hear the song in full the number of times you define before the selected song switches to a 45 second preview for all fans after that. For instance, a fan falls in love with your song after 5 plays and on the 6th play the song switches to 45 second preview. Your fan must hear the full song and they buy it from you. Set the same number of previews for every song on an album and fans can preview the whole album that number of times. This is especially helpful if you are an up and coming artists trying to get new fans. A fan can share your album with a friend that does not know you and the friend can hear all the songs which will help them decide to buy it. If all the fan can hear is a 45 second preview of each song, they may not fall in love with you or your music and you could have missed a big opportunity. If you are selling music, use FULL SONG PREVIEWS... only available on Rhythmic Rebellion.

The Song Promotional Info allows you to tell fans about the song - anything that you think might be interesting about how the song was recorded, the inspiration for recording that specific song, or about the recording session itself can be included here. Get creative with the information you want fans to have about a certain song! This is shown to fans under the Promo tab on the Music Player.

If you think your recording falls into another category, please reach out to the support team and let us know of any other types of recordings to add to this field. Fans can use recording type in their search for songs to listen to.

The information for this next section should have been created by the Songwriter in the Song Composition Title (SCT) creation form. You made a connection in the first step above. Clicking the blue PULL button causes the software to pull information from the song composition and auto fill the remaining fields. Song traits and characteristics include lyrics, genre, key signature, time signature, tempo, and language. However, if you change the tempo, lyrics, or other aspects of the song, you are allowed to update these so that all the information is correct for your version of the song. Your changes do not affect the songwriter's version. An example is when an artist takes a country song and records it as a rock song.

Once you've completed all of the required fields on this page you will be able to Save the song and click Complete in the upper right hand corner of the page. If the Complete button cannot be clicked (grayed out), this means that there is required information about the song that is currently missing. Look for green checkmarks in the list on the left side of the page!

When you exit the Song Recording Title form you will see SRT cards. If you are working on a new album then DO NOT click the blue Release / Make Visible button. Clicking the Release / Make Visible button makes the title visible and shows up on searches. You may not want this until your album is completely finished. Then you can click the button for all your SRT's at the same time. Clicking this button does not mean fans can play the song. That depends on the release date you set. But, if you want to promote the album before the album and songs are released, you can place your album on your website and fans can see the album title and song names even though they can't play the songs. This will create excitement and encourage pre-orders for your upcoming release.